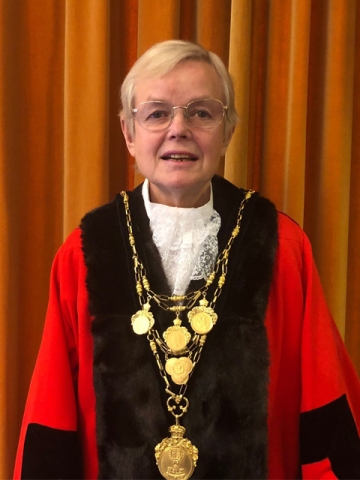 Christine was born in Cheadle Hulme, Cheshire.  In her early days she was schooled in Cheshire before being sent to boarding school in North Wales and then on to Manchester University where she studied as a dietician.  At the age of 20 she met Peter at a University event and married him a year later.  Once married they decided they wanted to experience new horizons and emigrated to Canada where they lived for 10 years.  Peter worked as an engineer and Christine as a dietician.  It was in Ontario, Canada where Christine started her political life as she served as the equivalent of parish councillor and spearheaded the build of a maternity hospital in Mississauga – along with other community projects.

They moved back to the UK in 1979 when Peter was appointed as a director at British Airways.  First moving to Crowthorne, Christine became a parish councillor for Wokingham, and then in 1984 Christine, her late husband Peter and their three children moved to Ascot where she became a parish councillor.  In 1995 Christine was elected a Borough Councillor for Sunningdale & South Ascot.

Over the past 27 years she has has held a plethora of roles including Deputy Leader between 2000-2003, on the cabinet for over 10 years and has chaired numerous panels and committees.

Christine has also been on the Fire Authority for 25 years and at time of being appointed was the only female member of the authority.

Today Christine is honoured to represent the constituents of Sunningdale & Cheapside and finally after being elected 8 consecutive times for Sunningdale will retire from the Council at the election next May. Christine hopes to use her last year as a Councillor, and as Mayor, to meet as many residents as she can and to give back to a place so dear to her heart.

The Mayor's son, Richard, was born in Canada but raised in the UK from the age of three. Raised for most of his life, and the place he calls home is Ascot/Sunningdale, albeit Richard went to school in Rugby and university in Cardiff.  As a professional, Richard has worked for Unilever, Fujitsu, Camelot and today works for an Australian lottery business called Jumbo Interactive.  Over the past 20 years Richard has carved out a role within the lottery industry having set-up EuroMillions (becoming its President for five years) and performing various director-level roles within the UK, Europe and North America.  Today Richard splits his time between Dallas Texas, and London.  Richard’s interests range from golf, rugby and travel through to mentoring and professional development of young professionals.

When Richard is working abroad and not available Christine’s daughter Mrs Sarah McKechnie may be available to accompany her.