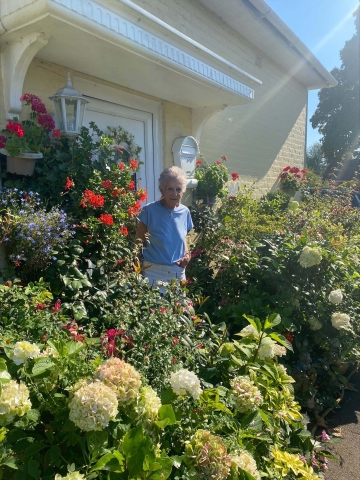 Prizes have been awarded in this year’s Garden in Bloom competition.

There were more than 300 entries into the contest, which is organised by the Royal Borough. All entrants received a certificate and the winner and runner-up in each ward also received a rosette. In addition, the winner received a £20 voucher to spend at Braywick Heath Nurseries.

Any garden visible from a footpath or road was eligible for entry and nominations were made by residents, passers-by and by councillors in their own wards. There was just a single category and the competition was judged by councillors on a ward-by-ward basis.

The Mayor, Councillor Christine Bateson, said: “The amount of support and enthusiasm for this year’s competition has been really pleasing to see and this was reflected in the level of dedication all our entrants put into their gardens to make them look so beautiful. They have all done their communities proud by showcasing their efforts to brighten up their neighbourhoods and it just shows what a beautiful borough we are all fortunate enough to live in. Thank you to everyone who entered.

“The Garden in Bloom competition is the council’s way of saying thank you for the work residents put into their gardens. This year it coincided with Her Majesty The Queen’s Platinum Jubilee and the competition really showed how much pride our residents have in their neighbourhoods and provided an added boost of colour as we marked this historic milestone.”

The Garden in Bloom awards scheme started in 1992 to acknowledge the important contribution private gardens make to the appearance of neighbourhoods.

The council is grateful to the Maidenhead Chamber of Commerce for their contribution to this year’s scheme.