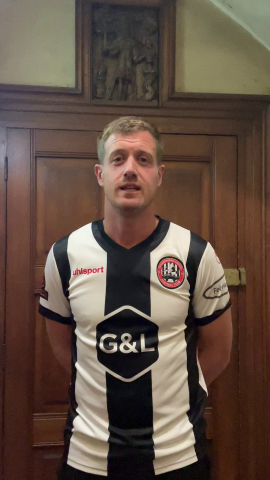 The Royal Borough, The Dash Charity and Maidenhead United FC are teaming up for White Ribbon Day and the World Cup, calling on all men to unite to tackle male abuse, harassment and violence towards women and girls.

Their campaign launches on Friday 25 November with a social media video starring male and female players from the football club, asking all men to play their part by challenging abusive attitudes and behaviours towards women and girls, such as cat-calling, sexist comments and invading personal space.

Delivering a simple but powerful message – “Let’s call it out to kick it out” – the video urges all men to take a collective stand as one team, lead by example and tackle foul play, asking men to consider the serious consequences of allowing abusive attitudes and behaviours to go unchallenged within society.

As this year’s White Ribbon Day coincides with the World Cup, football has been chosen as the national theme, harnessing the power of the “beautiful game” during 16 days of national activism to unite people around #TheGoal of positive change.

White Ribbon Day encourages everyone to make the “White Ribbon Promise”, to never commit, excuse or remain silent about male violence towards women and girls. Visit www.whiteribbon.org.uk/promise and check out and share the video from Friday 25 November on the social media channels of the football club, the council and The Dash Charity.

Locally, the campaign will also raise awareness of the valuable partnership work in the Royal Borough to help keep everyone safe and the ways people can report and get help if they are scared, threatened, or abused: whether at home or on a night out.

Jon Adams, CEO of Maidenhead United FC, said “Whilst anyone can be a victim of abuse, women and girls are more likely to experience violence and abuse, the effects of which can be devasting. We are proud to support White Ribbon Day and to join the team to end violence against women and girls – that’s #TheGoal.”

Nicola Miller, Chief Executive of The Dash Charity, said: “Both White Ribbon Day and the World Cup have fallen during a period of crisis for victims of domestic abuse. Across the UK, two women per week and 30 men per year lose their lives at the hands of a former or current partner.

“The Dash Charity provides the Royal Borough’s domestic abuse service, and demand for our services is at an all-time high. It’s up to everyone to take a stand and call out problem behaviours directed at women by men. Enough is enough.”

Councillor Stuart Carroll, Cabinet Member for Children's Services, Education, Health, Mental Health and Transformation, said: “We are delighted to team up with The Dash Charity and Maidenhead United FC to help the important White Ribbon message to reach further, and encourage all men and everyone to call out abusive attitudes and behaviours which have absolutely no place in our communities.

“Everyone deserves to be treated with equality and respect regardless of gender. Sadly, a small minority of men let the side down, causing women and girls to feel fear and intimidation. If such behaviour goes unchallenged, the consequences are significant.

“The vast majority of men exhibit all the right behaviours and we all have a responsibility to do the right thing. We have excellent joint-working and initiatives locally to support community safety, but everyone has a part to play in tackling male violence, abuse and harassment towards women and girls. Violence and abuse of any sort has absolutely no place in our borough and we continue to take a zero tolerance approach.”