Community invited to comment on neighbourhood planning proposals for Maidenhead 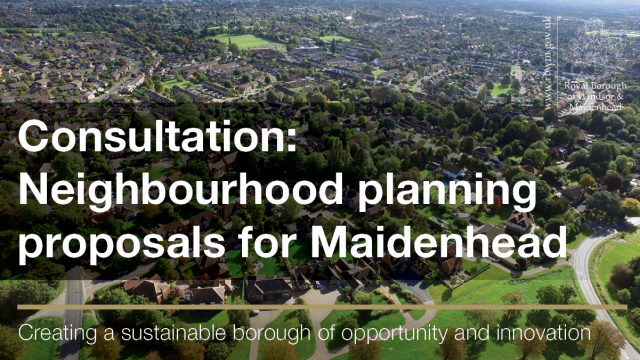 People are invited to comment on a community group’s proposals which if approved would allow the group to start preparing a draft Neighbourhood Plan covering the whole of Maidenhead’s unparished areas.

The Maidenhead Neighbourhood Forum group has applied to the Royal Borough of Windsor & Maidenhead to designate all of Maidenhead’s unparished areas as one neighbourhood area. These are the wards of Belmont, St Mary’s, Riverside, Furze Platt, Pinkneys Green, Boyn Hill, and Oldfield.

The council is running a six-week public consultation on the group’s proposals from today, Tuesday 25 October, until Tuesday 6 December. For full details and to take part, please visit http://consult.rbwm.gov.uk/portal or use the public-access computers available at all local libraries, where staff are happy to help if needed

The group’s proposals and supporting documents are also available for inspection online and at Maidenhead and Boyn Grove Libraries, where paper response forms are available upon request.

Councillor Phil Haseler, Cabinet member for planning, parking, highways and transport, said: “Neighbourhood plans are concerned with use and development of land, and may contain a vision, aims, planning policies, proposals for improving the area, and allocation of sites for specific kinds of development.

“In deciding this application, the council is keen to hear the views of people across Maidenhead on the proposed geographic area and the prospective forum. The council will then decide on both proposals, having considered the technical planning considerations set out in national practice guidance, legislation and the consultation responses.”

If a designation is made, no other organisation or body can be designated for that neighbourhood area until that designation expires or is withdrawn.