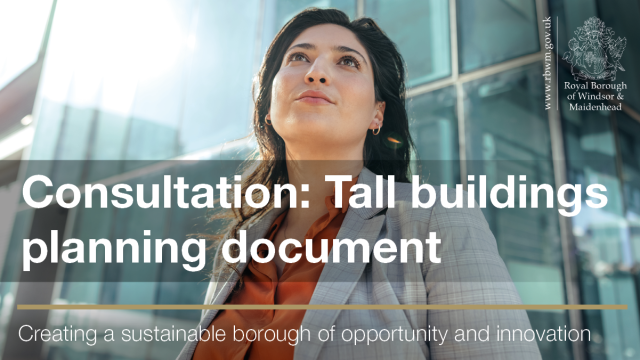 The community is invited to comment on the draft of a planning document which will help to ensure the suitable location, height and design of future tall buildings within the Royal Borough.

The council is holding a six-week public consultation, until 11 October, on the draft Building Height and Tall Buildings Supplementary Planning Document (SPD), which will guide developers in choosing the best locations for tall buildings and achieving architectural excellence, and help the council decide planning applications.

This technical document adds further detail to the planning policy already set in the adopted Borough Local Plan (BLP), which defines a “tall building” as a building of more than 1.5 times the typical height of the surrounding buildings, or a minimum of four storeys in a two-storey area.

The BLP already confirms that large parts of the borough are unsuitable for tall buildings due to heritage, landscape and townscape character. Tall buildings of the highest quality of design will only be considered appropriate in areas with high public transport accessibility, a mix of uses and an existing or emerging urban character that can accommodate the scale of proposed development.

In providing further guidance, the draft SPD sets down ten key principles to assist developers and architects with the design and layout of tall buildings in suitable locations. It also makes recommendations for a limited number of locations where development of increased height and tall buildings are potentially suitable, and where they would be inappropriate.

The draft SPD defines most of the borough as inappropriate for tall buildings, including highly sensitive Conservation Areas and the Green Belt, along with identifying other areas that are sensitive to tall buildings. It affirms that most new development within established settlements will generally be expected to mirror the height of existing buildings, to protect the borough’s scale and character.

In the limited locations where tall buildings are potentially suitable, it states that the borough is generally only suitable for buildings of 1.5 to 2.5 times context height, with taller landmarks only considered in Maidenhead town centre.

To read the draft SPD and submit comments, visit https://consult.rbwm.gov.uk/kse or Building Height and Tall Building Supplementary Planning Document Consultation. Public-access computers are available in libraries, where staff can offer digital support if needed. People can also visit Maidenhead Library, Windsor Library and Ascot Library for a hard copy of the draft and pick up and submit a feedback form. Comments or completed forms can also be emailed to planning.consultation@rbwm.gov.uk

In addition, people are invited to a drop-in event at Maidenhead Library on Thursday 8 September between 2pm and 6.30pm. An online consultation event will also be held via Microsoft Teams on Wednesday 28 September from 6pm to 8pm. The link for joining will be added to the website that week.

Councillor Phil Haseler, Cabinet member for planning, parking, highways and transport, said: “This is an important SPD that, once adopted, will guide developers and architects of tall buildings in selecting the best locations and achieving excellence in design, and help the council decide planning applications. I would encourage everyone to take part in the consultation.

“The draft reinforces the policy already set in the BLP, controlling the locations and scale of taller buildings. It affirms that the height of most new development within established settlements should essentially mirror the height of surrounding buildings to protect the borough’s scale and character.

“At the same time, we’re a growing borough and can expect to receive planning applications for tall buildings, which the SPD gives us a way to assessing for suitability to ensure they make a positive contribution. Making planned provision for high quality, well-located tall buildings in a limited number of suitable locations will make efficient use of land, including highly accessible brownfield land, to meet our local needs, support investment, regeneration, and help protect the Green Belt.”