Essential server maintenance will be taking place on Sunday 29 January 2023 between 2pm and 6pm. During this time you may experience issues accessing some areas of this website, this will include the search function, know your neighbourhood and the address look-up which will affect registering for My RBWM and some online forms. We apologise for any inconvenience this may cause. 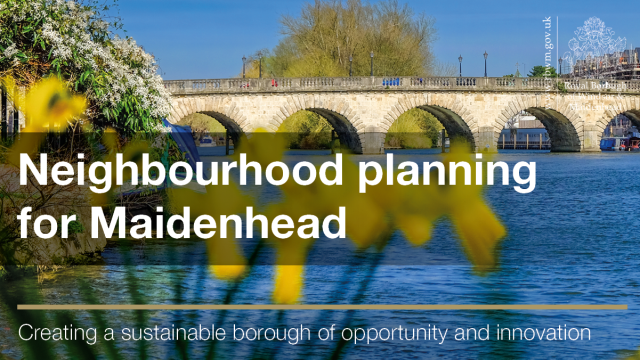 The Royal Borough of Windsor & Maidenhead has given the green light for a community group to start preparing a draft Neighbourhood Plan to help guide future development across Maidenhead’s unparished areas.

Neighbourhood Plans allow communities to put in place planning policies for a specific neighbourhood area, adding detail to the policies already set in the Borough Local Plan. They are used to help decide planning applications.

Following a six-week public consultation, the council’s Planning Department has now agreed both of the group’s proposals, having confirmed the applications meet the legal requirements and considered the consultation feedback. Overwhelmingly, people who responded supported both proposals.

This decision allows the group to start the process of community engagement and consultation to shape a draft Neighbourhood Plan covering the wards of Belmont, St Mary’s, Riverside, Furze Platt, Pinkneys Green, Boyn Hill, and Oldfield.

Neighbourhood Plans are concerned with use and development of land, and may contain a vision, aims, planning policies, proposals for improving the area, and allocation of sites for specific kinds of development. When a designation is made, no other organisation or body can be designated for that neighbourhood area until that designation expires or is withdrawn.

Councillor Phil Haseler, Cabinet member for planning, parking, highways and transport, said: “We would like to thank everyone who shared your views in this consultation, which the Planning Department has carefully considered alongside the national legal requirements in making this positive decision on the group’s proposals.

“The forum’s role now is to engage widely with the rest of the community to prepare a draft Neighbourhood Plan, which will itself be subject to public consultation and independent examination. We look forward to continuing to work with and support the group during the next stage of the process.”