Size: 28,467 sq m/ 2.8 hectares.
A walk around the perimeter of this park will contribute 950 steps to the advised 10,000 daily steps recommended to improve fitness.

BBQs are not permitted in any of the parks and open spaces. 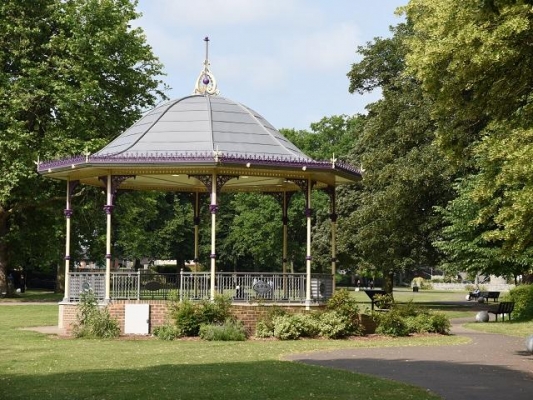 Some of the annual events that take place in the Gardens include:

Plans to create a riverside garden in this area date from 1893 although the possibilities must have been discussed for some years prior to this, as in 1895, land had been purchased, and by 1902 the gardens were sufficiently complete to permit the planting of a London Plane tree in August 1902 to celebrate the Coronation of Edward VII and his Queen, Alexandra.

A bandstand was also erected and the band of the Royal Horse Guards played there regularly. A replacement bandstand was built in 2016 - a Royal Borough heritage project was awarded a grant from the Armed Forces Community Covenant, celebrating the unique and long-standing links between the Queen, armed forces and Windsor. It also commemorates the Queen as the longest reigning monarch in British history and in turn the longest-reigning Head of the Armed Forces. The role of the armed forces is explored in the six commemorative plaques on the bandstand by illustrative artist Rebecca Elliott. Each of the plaques displays one important event involving the armed forces from each of the six decades of the Queen’s reign. The events were the subject of schools-based workshops from which key themes were identified and used to inform the final artwork. (See here for more information).

In June 2009 The Dyson Memorial Fountain (which had been moved from its Barry Avenue location) was extensively refurbished and now stands in the south-east corner by the Goswell Road entrance of the Park. The Memorial, in the form of a drinking fountain, commemorates Thomas Dyson who founded 'Dyson and Sons', pianoforte dealers of Thames Street in 1865 and who became Mayor in 1890. Thomas Dyson actively promoted improvements in the town, such as the construction of The Promenade.